How Library Classes in the Arts Are Changing Aging 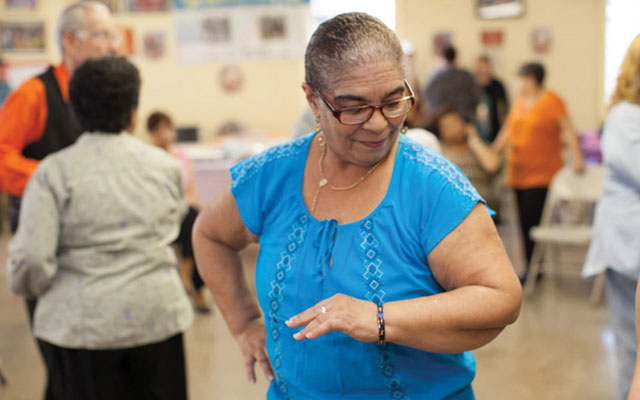 Six words sum it up: The arts are good for you.

Inspired by the research of the late Dr. Gene D. Cohen demonstrating the positive impact cultural programs have on our intellectual, emotional and even physical health as we age, nine years ago, Maura O’Malley and Ed Friedman co-founded Lifetime Arts, a nonprofit arts service organization.

“My career had been in arts education, and Ed and I both had become involved in caregiving. We looked around at programs available for older adults, and frankly it was pitiable,” O’Malley remembers.

The genius of her idea lay in using public libraries to administer the programs for people 55 and older since every U.S. community has a public library. “In some areas, libraries are the only cultural institution,” O’Malley adds.

However, library systems are complex. Sometimes it isn’t even clear who a grant-giving nonprofit would approach about bringing arts programs for older adults into the building. By 2009, Lifetime Arts had made headway enough to re-grant money it had received to a library in Westchester, N.Y., that would host a skills-based arts program aimed at older adults.

Today, Lifetime Arts has involved 20 major library programs in 13 states. Each “class” is taught by a recognized “artist/teacher” (or teaching artist), runs for eight sessions and ends with a “culminating” event, such as an exhibition or performance.

Along the way, people taking the classes make friends and learn something new. O’Malley says: “People show up at these library programs with no prior experience in the arts, but they create communities in these libraries. The artists give people tools and time to try new things. People who have never sung, danced or taken a digital photograph learn to do so.”

Here is a sampling of what Lifetime Arts is accomplishing in three libraries:

Before a library receives a grant from Lifetime Arts, the institution must survey its patrons and others in the area to find out what kind of program potential participants would like. In Sunset Park, Brooklyn, people wanted to learn to tango.

“We started out with 20 people registered,” says Luz Acevedo, office manager for the Services for Older Adults at the Brooklyn Public Library, “but the turnout weekly is more like 30.”

The artist/instructor, Walter Perez, who hails, appropriately, from Argentina begins each class with a warm-up. People then partner up, and he teaches the steps — no mean feat considering some of the participants use walkers or canes. Perez also has taught some steps with the participants forming a circle so they could support fellow learners with balance problems. The class began at 9:30 a.m. and lasted two hours, with a break in the middle.

“The great thing about Walter is that he engages each person and makes her feel special,” Acevedo observes. “If someone doesn’t feel like dancing, Walter speaks with her so she feels more comfortable.”

Some of the people in the class are library regulars; others found out about the program through the nearby senior center or fliers. The participants, who are as old as 90, are now all lovers of Latin dance. Some have even requested classes in bachata and merengue.

At the upcoming “culminating event,” which will take place in the main dining room of the nearby United Senior Center of Sunset Park, Perez will begin by telling the audience about the history of the tango. He will then demonstrate, with the participants, the warm-up exercises.

“This program was so great because people had a chance to use and strengthen their muscles while they were listening to music and performing an art, the tango,” says Acevedo. “One of our main goals, though, was to have the participants engage with each other beyond the classes. That happened, too. I would get exhausted, but these people didn’t want to stop dancing. It is so exciting.”

This unusual workshop is the brainchild of teacher/artist William Clipman, a poet and musician who Mary Sagar, administrative librarian at the Chandler Downtown Library, and Ted Liebler, the adult services librarian, say is a something of a local celebrity.

Clipman’s program was based on a class he teaches elsewhere called “Myths and Masks,” which he modified for the Chandler Downtown Library group. He begins his exploration by having people fill out a 10-question form to help them discover the “mythic” being inside themselves.

“Some people answer with a few words; others write five or six pages, but the participants always come up with something that will be the basis of their poem,” Clipman explains.

MoreWho Says You Need Talent to Be on Broadway?

Next, the “students” create a plastic bandage cast (a mask) of their faces. “We liked this part especially because the people have to team up to do this, and it gets them talking with their fellow classmates,” says Liebler.

for the mythic being they have discovered through the questionnaire exercise. “First they paint it, and then they begin decorating the mask with 3D ‘found’ objects, such as feathers, fabric, imitation gems and other items,” Clipman explains. The end product is wearable — and striking to look at.

“People shared the objects they brought in, and that was another community-building asset of the class,” Sagar says.

The Fall 2015 class began with 20 people (although two had to drop out because of a family emergency). In their “culminating event ” in a new, large state-of-the-art room in the library, participants wear their masks and recite their “poem.”

“It’s empowering,” says Liebler. “The people in the workshop go from vision to product. The way they manifest their creations unifies them as a group.”

Liebler noticed one other by-product of the class that he thinks is priceless: laughter.

Says Liebler: “Laughter in the library — that is a great thing to hear.”

“I had an idea in mind for a long time,” says Risa Getman, assistant director of the Hendrick Hudson Free Library. “In fact, I wasn’t even going to apply for the grant from Lifetime Arts unless they would let me do this program.”

For three years, Hendrick Hudson Free Library has sponsored a play-reading group that meets quarterly; Getman chooses a script and people take parts and read from it.

“I wanted to take this one step further. I wanted people in the group to be able to perform in an actual play,” she says.

A slight adaptation of Reginald Rose’s classic  fit all her requirements. “Most of the action takes place around a table, so that meant people who weren’t particularly mobile could stay seated,” Getman explains. In real jury rooms, jurors have notebooks in front of them, which meant that the participants could rely on their scripts and not have to worry about memorizing lines.

And to deal with the issue that most of those who signed up were women? Getman changed the title to “12 Angry Jurors.”

Getman had promised that everyone who signed up would get a part, so she started out with 13 people  (12 jurors and the guard) and when others decided they wanted to join in, Getman turned them into
understudies.

The teaching artist, Mary Crescendo, also worked magic with the group. “There were times when she didn’t know how they would deal with certain aspects of the performance, and she was open to suggestions from the actors,” Getman says.

The “culminating event” was a terrific success. About 90 people attended the performance, which was followed by a reception. And talk about long-tail effects: One of the actors had connections with the Veterans Administration hospital in the area, and the group went there to give a special performance.

Getman believes that the participants gained from being so involved in the theater workshop. “It pushed people beyond their comfort zone, and that they succeeded was a huge morale boost,” she says.

The actors also forged a strong community. “They started going out to lunch together. At the end of the workshop, they decided they wanted to have a cast party. The library couldn’t fund that, but the actors didn’t care. They put together a committee and did it themselves,” Getman says. “All the library provided for them was the space.”